Why the English-Speaking World Resists the Reality of Climate Change

You would think if you were a country particularly prone to being mugged by severe storm events of increasing intensity, frequency and destructiveness you might be just as particularly receptive to overwhelming scientific evidence of the causes.  However if you happen to be one of the major English-speaking countries you are and you aren't.  When it comes to Australia, the United States, Canada and Britain, all four countries are being hammered by climate change impacts yet remain among the countries least likely to accept the scientific evidence. 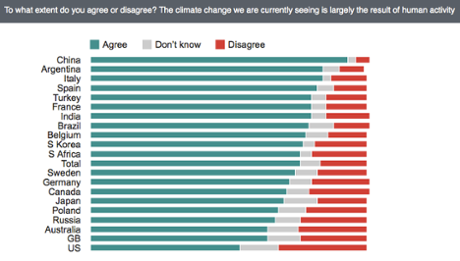 What this chart also reveals is that, even in the United States where denialism is at its strongest, a solid majority of the public accepts anthropogenic global warming/climate change.  In all four countries, the government is plainly at odds with its people when it comes to climate change.

Well if our Anglosphere isn't working for our peoples, who do these governments serve?  Oh sorry, I don't know what I was thinking.  Forget I asked.

Was it that obvious or have you been reading the papers?

Just curious but the largest producer of oil in
northern europe, Norway is not on the list. Any
reason why the omission?

I wasn't aware that Norway was considered part of the Anglosphere. I'm also not sure that climate change denialism has much hold in Norway or its government. Indeed the country's sovereign wealth fund, the largest in the world, is moving to divest itself of high-carbon fossil fuel investments such as bitumen. The divestment initiative isn't so much focused on curbing emissions as it is a recognition that high-carbon assets such as our Tar Sands are at real risk of becoming unsellable.