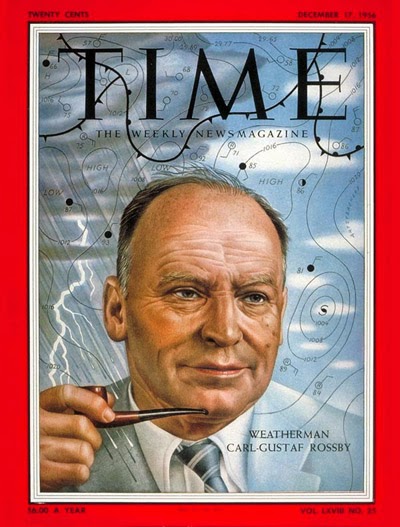 We owe a lot to Carl-Gustav Rossby, the Swedish-born American scientist who pioneered research into atmospheric thermodynamics at MIT and was instrumental in the university establishing America's first department of meteorology.

Today, Rossby's name is most commonly associated with this: 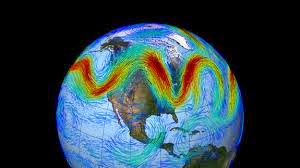 This image depicts what are sometimes called "Rossby Waves", the deep and meandering jet stream waves that now draw warm air from the south far up into the north and cold northern air far into the south.  Remember when Atlanta, Georgia went into deep freeze in February while a small village in northern Alaska basked in 62 degree F heat?  That was a Rossby Wave at work.  It's said to be the result of a warming Arctic and a heated, more energetic Arctic atmosphere. Atmospheric thermodynamics, get it?

Researchers have noticed that this new. undulating jet stream doesn't progress more or less steadily west to east like the old jet stream we grew up with.  Instead there are periods when it seems to stall or stop for days or weeks at a time (think Polar Vortex).   When it does stall it seems to bring extreme or severe weather events such as droughts, floods, heatwaves or freezing states.

These observations have now been analyzed by German scientists who confirm the recent increase in these "blocking patterns" that trigger severe weather events.

Climate scientists in Germany noticed that since 2000 there have been an "exceptional number of summer weather extremes, some causing massive damage to society".  So they examined the huge meanders in the high-level jet stream winds that dominate the weather at mid-latitudes, by analysing 35 yers of wind data amassed from satellits, ships, weather stations and meteorological balloons.  They found that blocking patterns, which occur when these meanders slow down, have happened far more frequently.

"Since 2000, we have seen a cluster of these events.  When these high-altitude waves become quasi-stationary, then we see more extreme weather at the surface," said Dr. Dim Coumou, at the Potsdam Institute for Climate Impact Research.  "It is especially noticeable for heat extremes."  The intense heawaves in Russia in 2010, which saw 50,000 people die and the wheat harvest hit hard, and in western Europe in 2003, which saw 30,000 deaths were both the result of blocking patterns.

These blocking patterns are also behind an increase in flash flooding of the sort that overwhelmed Calgary last year and southern California last month.  A heavy rainstorm develops and, instead of moving eastward to some other place the next day, it stays overhead in one place.

So far the research shows a correlation between Arctic warming but we'll have to wait for further computer modeling before we have clear proof of a causal link.
Posted by The Mound of Sound at 10:27 AM