Mulcair and Trudeau Ignore the Facts 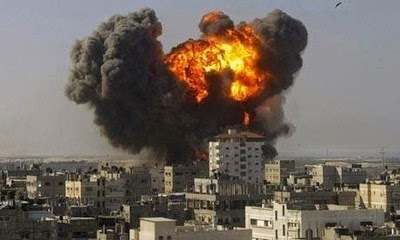 To Tom Mulcair and Justin Trudeau, Israel's butchery in Gaza is merely self-defence.  That's their opportunistic story and you'll get nowhere trying to shift them off it.  All of which makes it so infuriating to read another factual account of Israel's calculated march to war.  One of these comes via the International Crisis Group and Nathan Thrall:

The current war in Gaza was not one Israel or Hamas sought. But both had no doubt that a new confrontation would come. The 21 November 2012 ceasefire that ended an eight-day-long exchange of Gazan rocket fire and Israeli aerial bombardment was never implemented. It stipulated that all Palestinian factions in Gaza would stop hostilities against Israel, that Israel would end attacks against Gaza by land, sea and air – including the ‘targeting of individuals’ (assassinations, typically by drone-fired missile) – and that the closure of Gaza would essentially end as a result of Israel’s ‘opening the crossings and facilitating the movements of people and transfer of goods, and refraining from restricting residents’ free movements and targeting residents in border areas’. An additional clause noted that ‘other matters as may be requested shall be addressed,’ a reference to private commitments by Egypt and the US to help thwart weapons smuggling into Gaza, though Hamas has denied this interpretation of the clause.

During the three months that followed the ceasefire, Shin Bet recorded only a single attack: two mortar shells fired from Gaza in December 2012. Israeli officials were impressed. But they convinced themselves that the quiet on Gaza’s border was primarily the result of Israeli deterrence and Palestinian self-interest. Israel therefore saw little incentive in upholding its end of the deal. In the three months following the ceasefire, its forces made regular incursions into Gaza, strafed Palestinian farmers and those collecting scrap and rubble across the border, and fired at boats, preventing fishermen from accessing the majority of Gaza’s waters.
The end of the closure never came. Crossings were repeatedly shut. So-called buffer zones – agricultural lands that Gazan farmers couldn’t enter without being fired on – were reinstated. Imports declined, exports were blocked, and fewer Gazans were given exit permits to Israel and the West Bank.
Israel had committed to holding indirect negotiations with Hamas over the implementation of the ceasefire but repeatedly delayed them, at first because it wanted to see whether Hamas would stick to its side of the deal, then because Netanyahu couldn’t afford to make further concessions to Hamas in the weeks leading up to the January 2013 elections, and then because a new Israeli coalition was being formed and needed time to settle in. The talks never took place. The lesson for Hamas was clear. Even if an agreement was brokered by the US and Egypt, Israel could still fail to honour it.
This is obviously not the Israel nor is it the Gaza of Mulcair's and Trudeau's fantasies.  Yet it is on those miserable fantasies that Mulcair and Trudeau would have us empower them to forge Canadian foreign policy.  A pox on both of them.
Thrall has chronicled, in detail, the reduction of Gaza by Israel and Egypt in the runup to this latest butchery.  The article deserves to be read in its entirety in order to have an understanding of what underlies this slaughter that our opposition leaders cannot bother to acquire.