Of Zombie Politics and Culture War 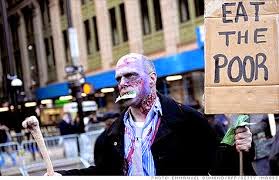 In a system that reduces life to a chain of disconnected reactions to shock, personal communication tends to lose all meaning... The individual under terrorist conditions is never alone and always alone.  He becomes numb and rigid not only in relation to his neighbor but also in relation to himself'; fear robs him of the power of spontaneous emotional or mental reaction.  Thinking becomes a stupid crime/ it endangers his life.  The inevitable consequence of that stupidity spreads as a contagious disease among the terrorized population.  Human beings live in a state of stupor, in a moral coma.
- Leo Lowenthal on authoritarianism rooted in modern civilization.

If you're looking for a dark read to round out your summer, you won't be disappointed to pick up Henry Giroux', "Zombie Politics and Culture in the Age of Casino Capitalism."  Giroux, an American intellectual who now camps out at McMaster University, focuses on how authoritarianism is creeping into our body politic, rendering democracy powerless and meaningless.  At just over 160-pages it's no tome yet I've been digesting it, chapter by chapter, for a few months and I'm still not halfway through.  It's the sort of book you might read and then ponder until you've had your fill and then put it down, meaning to pick it back up soon but not quite doing it.

A quick look at Giroux' opening comments about the rise of "Authoritarianism with a friendly face."

In the minds of the American public, the dominant media, and the accommodating pundits and intellectuals, there is no sense of how authoritarianism in its soft and hard forms can manifest itself as anything other than horrible images of concentration camps, goose-stepping storm troopers, rigid modes of censorship, and chilling spectacles of extremist government repression and violence.  That is, there is little understanding of how new modes of authoritarian ideology, policy, values, and social relations might manifest themselves in degrees and gradations so as to create the conditions for a distinctly undemocratic and increasingly cruel and oppressive social order.  As the late Susan Sontag suggested in another context, there is a willful ignorance of how emerging registers of power and governance "dissolve politics into pathology."  ...there is no room in the public imagination to entertain what has become the unthinkable - that such an [authoritarian] order in its contemporary form might be more nuanced, less theatrical, more cunning, less concerned with repressive modes of control than with  manipulative modes of consent - what one might call a mode of authoritarianism with a distinctly American character.

Giroux goes on to touch upon a theme raised occasionally on these pages - the 'depoliticizing' of society.  In Canada it's a product of the spread of neoliberalism throughout the Conservatives, Liberals and New Democrats.  We wind up staring at a row of grey suits stuffed with wet cardboard and turn on our heels away from politics entirely.  Never in my lifetime has the political spectrum of my country been so compressed, political discourse so stilted and political vision so abnegated.  One of the consequences of this, according to Giroux, is an everyman-for-himself culture.

Agency is now defined by a neoliberal concept of freedom, a notion that is largely organized according to the narrow notions of individual self-interest and limited to the freedom from constraints.  ...It is an unlimited notion of freedom that both refuses to recognize the importance of social costs and social consequences and has no language for an ethic that calls us beyond ourselves, that engages our responsibility to others.

...This merging of the market-based understanding of freedom as the freedom to consume and the conservative-based view of freedom as a restriction from all constraints refuses to recognize that the conditions for substantive freedom do not lie in personal and political rights alone; on the contrary, real choices and freedom include the individual and collective ability to actively intervene in and shape both the nature of politics and the myriad forces bearing down on everyday life - a notion of freedom that can only be viable when social rights and economic resources are available to individuals.

...the formative culture necessary to create modes of education, thought, dialogue, critique, and critical agency - the necessary conditions of any aspiring democracy - is largely destroyed through the pacification of intellectuals and the elimination of public spheres capable of creating such a culture.

Zombie Politics and Culture is a truly worthwhile read for anyone with a sense that our democracy can no longer be trusted to those who march beneath Conservative, Liberal or New Democrat banners.  While we're still a good distance behind the violent authoritarianism practised openly today across the United States, democracy in Canada is badly in need of restoration.