What Is the Meaning Of All This Chaos? 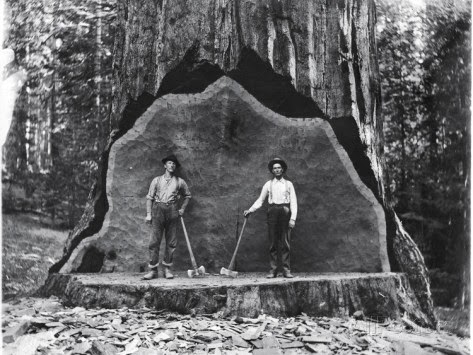 I am always amazed at how television pundits manage to call elections when just a fraction of cast votes have been counted.  It's always been a matter of considerable frustration out here on the west coast when elections are decided before our polls even close.

A recent post on research warning of imminent societal collapse brought me back to some vague musings I've been having about the chaos that seems to be rising throughout much of the globe and whether these incidents, taken collectively, represent the onset of collapse.  In other words, are we observing the beginnings of the collapse of our global society?

You don't fell a tree with one blow of an axe.  The bigger and stronger the tree, the more strikes that are required.  Yet if the tree is not strong, if it's small, just a couple of axe blows may do the trick.

I have tried, I really have, but I can't think of one of these issues or conditions that hasn't significantly worsened over the past ten or twenty years.  I can't think of one of them that we have collectively chosen to wrestle back under our control.  We're not even trying.  We seem to have embraced our own version of Andean Fatalism. "When your number's up, your number's up."

Until Reagan, Thatcher and Mulroney eviscerated our national psyche, we used to believe in progress, a better tomorrow. It was a belief that was as expansive as it was inclusive and forward-looking.  It somehow died at the hands of those three axemen.

As I listen to the incessant axe blows, I wonder if what I'm really hearing is the toppling of our civilization?  The tree still stands, for now. How much longer before it falls?

I'm not so sure it's going to fall as much as it's going for a total re-build. There are failed states and the Sunni v. Shi'a, and that's not going away anytime soon.
But in the G-20 and elsewhere, the next 30-50 years is going to change drastically. Things like the elimination of driving jobs and lots of white collar jobs to "Artificial Intelligence", the next expert systems. Monopoly game capitalism will have to disappear.
Where this gets crunchy, is that folks like the Koch Brothers need people to buy their stuff, but 40%+ don't have jobs. There must be an accommodation or societal change will be revolutionary. We could even see the 2nd American Revolution in 30-50 years, maybe less.
Gotta get off the gawddam planet.

Ed, I think you are absolutely right. If the next generation or my grandchildren (I am 75) has basic needs, how do they pay for them from from their TFF level equivalent wages. There will always be the 1%, however, I see my grandchildren having to live in what we might call "group homes" where they live as couples and perhaps couples with children in order to pay for the necessities of life. Not only that, they will never earn enough to pay up forward for the CPP and OAP that their parents expected would be available to subsidize their pension (if they have one) and CPP as well as OAP. The thing the CONNs forget is that it is the next generation that pays the cost of funding their parents CPP and OAP and (which is critical here) the current Guaranteed Income Supplement. I see the GIS as dead in the water because the generatopm exected to pay (forward) that cost will not have the income, therefore, have not paid enough taxes to fund this supplement. In other words, where the H---do we go from here?

Mound: I have a picture of my father-in-law sitting in front of a cut down tree similar to the one in this blog. I recently left Vancouver Island where there were many trees that looked the same. No longer! My own father worked in a sawmill in the Fraser Valley and as a genealogist, looking at Voters' lists, nearly all the folks registered who lived in my small hamlet of Hammond, most of the men worked at the Hammond Cedar Mill. That was the basis of the economy of this whole small town. How many jobs are there now at this same mill?

Hi, Ed. The scenario you envision contemplates some orderly, even if revolutionary, reformation. I wish I could believe that but I don't. My own studies in revolution, admittedly a few decades old and sporadically updated in the interval, reveal no strong history of "milk and honey" revolution. It's more apt to be Menshivik slaughtered by Bolshevik or The Terror. I can't see a future much above anarchy.

@ Lulymay - our children and grandkids are going to have to take what is rightfully theirs from a system disinclined to accommodate their needs. Accepting the burdens immorally placed on them by previous generations is submission and that is, essentially, lethal. Those so beset that they see revolution as essential to their survival tend to see the world much differently than the rest of us.

"It's more apt to be Menshevik slaughtered by Bolshevik or The Terror." — you could very well be 100% correct.
As a 65 year-old, I like to believe there will be surprises, good and bad.

To get an idea of was could possibly emerge, I really recommend two novels by Daniel Suarez, "Daemon" and "Kill Decision". Present day "SF", and from what I know about expert systems, frighteningly possible, so much so, I passed them on to a friend who supplies surveillance and bomb-disposal robots to all sorts of grungy countries.